Palisade Investment Director, Julian Widdup, said: “Palisade is proud to support the delivery of this solar generation plant. The Project truly reflects the environmental, social and governance philosophy that underpins Palisade’s investment strategy. This asset continues to generate very attractive investment returns for our investors and reducing the Airport’s overall carbon footprint is an important component of our sustainability objective.” 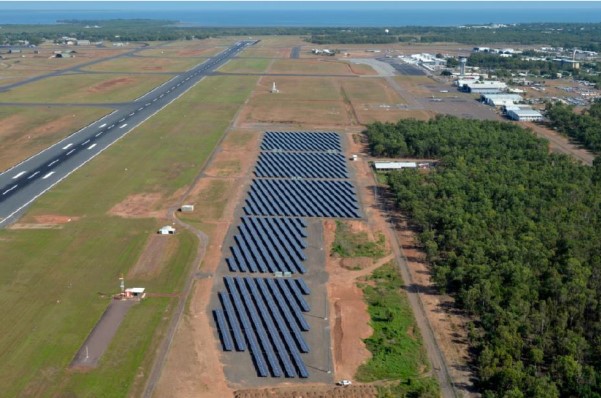 Please refer to the below press release by Darwin International Airport

Darwin International Airport has flicked the switch on its new 4MW (megawatt) photovoltaic (PV) solar array, which will provide a significant proportion of the airport’s solar power. This marks the end of Stage 1 of the solar project and sees the organisation progress to Stage 2 with a further 1.5MW.

Upon completion, the total value of the project will be $13 million, with the Stage 1 solar array being the largest airside photovoltaic (PV) solar array in the world.

Darwin International Airport is ‘lighting the way’ towards a more sustainable future by showing leadership in reducing its carbon footprint.

Along with its substantial investment in the past 20 years in growing aviation capacity, Northern Territory Airports has invested strongly in community partnerships and environmental stewardship.

Its pioneering investment in solar energy is unparalleled for an airport operator in the southern hemisphere.

Darwin International Airport’s 4MW Stage 1 solar array is the largest airside PV (photovoltaic) system in the world. Alice Springs Airport has pioneered the use of solar technologies and is almost self-sufficient in its power needs. Darwin Solar 1.5MW Stage 2 is now underway to be completed by end of 2016.

Darwin International Airport’s new solar farm is powered by a 4MW PV array at the eastern end of the main runway.

Construction of Stage 1, which began last December, comprises 15,000 solar panels over six hectares and will produce electricity equivalent to the consumption of 1,000 households.

CAT Projects, an NT based indigenous-owned company which conceived the development and acted as Owners Engineer and Project Superintendent UGL which engineered procured and constructed the solar farm